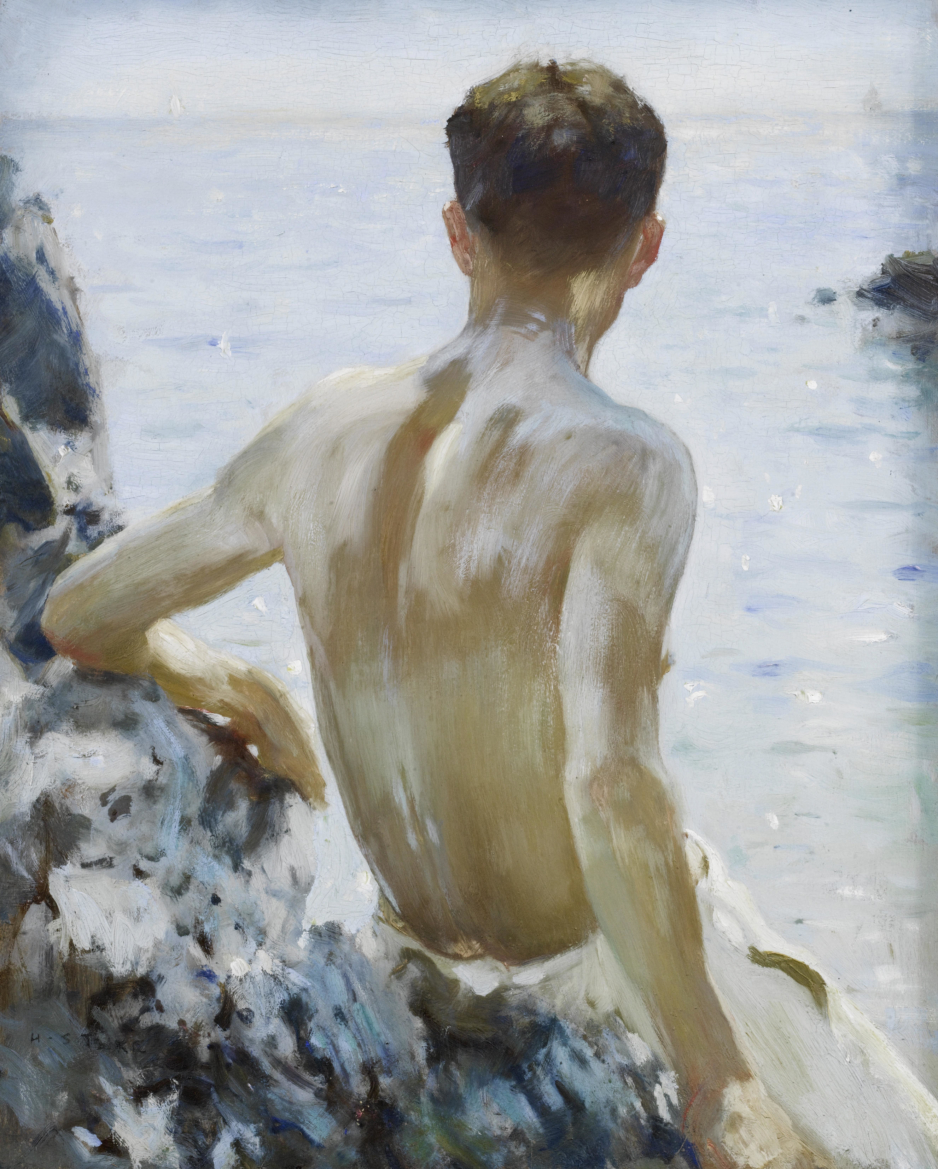 Henry Scott Tuke RA RWS (12 June 1858 – 13 March 1929), was an English visual artist; primarily a painter, but also a photographer. His most notable work was in the Impressionist style, and he is probably best known for his paintings of nude boys and young men.

Tuke was encouraged to draw and paint from an early age and some of his earliest drawings—from when he was four or five years old—were published in 1895. In 1870, Tuke joined his brother William at Irwin Sharps's Quaker school in Weston-super-Mare, and remained there until he was sixteen.

In 1875, Tuke enrolled in the Slade School of Art under Alphonse Legros and Sir Edward Poynter. Initially his father paid for his tuition but in 1877 Tuke won a scholarship, which allowed him to continue his training at the Slade and in Italy in 1880. From 1881 to 1883 he was in Paris where he met Jules Bastien-Lepage, who encouraged him to paint en plein air. While studying in France, Tuke decided to move to Newlyn Cornwall where many of his Slade and Parisian friends had already formed the Newlyn School of painters. He received several lucrative commissions there, after exhibiting his work at the Royal Academy of Art in London.

In 1885, Tuke returned to Falmouth where many of his major works were produced. Tuke became an established artist and was elected to full membership of the Royal Academy in 1914. Tuke suffered a heart attack in 1928 and died in March, 1929. Towards the end of his life Tuke knew that his work was no longer fashionable. In his will he left generous amounts of money to some of the men who, as boys, had been his models.

Today he is remembered mainly for his oil paintings of young men, but in addition to his achievements as a figurative painter, he was an established maritime artist and produced as many portraits of sailing ships as he did human figures. Tuke was a prolific artist—over 1,300 works are listed and more are still being discovered.

Tuke was born at Lawrence Street, York, into the prominent Quaker Tuke family. His brother William Samuel Tuke was born two years earlier in 1856. His father, Daniel Hack Tuke, a well-known medical doctor specialising in psychiatry, was a campaigner for humane treatment of the insane. His great-great-grandfather William Tuke had founded the Retreat at York, one of the first modern insane asylums, in 1796. His great-grandfather Henry Tuke, grandfather Samuel Tuke and uncle James Hack Tuke were also well-known social activists. The Tuke family's ancestry can be traced back to Sir Brian Tuke, who served as an adviser to King Henry VIII of England (replacing Sir Thomas More).

In 1859 the family moved to Falmouth in Cornwall where it was hoped the warmer climate would benefit Tuke's father, Daniel, who had developed symptoms of tuberculosis. Daniel survived there and lived on until he was 68. He established a small doctor's practice in his house in Wood Lane. His sister, Maria Tuke Sainsbury (1861–1947)—who wrote a biography of her brother after his death—was born there.[1] William went on to study medicine but Henry, or Harry as he was called by the family, showed no interest in the profession.

Tuke was encouraged to draw and paint from an early age. Tuke and his siblings were taught by a governess at home. Maria described their childhood in Falmouth as "a very happy and healthy one" [2] and the long summer days spent on the beach and swimming in the sea had a lasting effect on Tuke; other enduring memories were the firm friendships the young Tuke formed.

In 1874 Tuke moved to London, where he enrolled in the Slade School of Art. It was in Falmouth that the young Tuke had been introduced to the pleasures of nude sea bathing, a habit he continued into old age. After graduating he travelled to Italy in 1880, and from 1881 to 1883 he lived in Paris, where he studied with the French history painter Jean-Paul Laurens and met the American painter John Singer Sargent (who was also a painter of male nudes, although this was little known in his lifetime).[3]

During the 1880s Tuke also met Oscar Wilde[4] and other prominent poets and writers such as John Addington Symonds, most of whom were homosexual (then usually called Uranian) and who celebrated the adolescent male. He wrote a "sonnet to youth" which was published anonymously in The Artist, and also contributed an essay to The Studio.[5]

In 1883, Tuke returned to Britain and moved to Newlyn, Cornwall joining a small colony of artists including Walter Langley, Albert Chevallier Tayler and Thomas Cooper Gotch. These painters, and others, became known as the Newlyn School. He worked from Rose Cottage at Tregadgwith Farm, Cornwall at the head of the Lamorna valley.[6]

In Newlyn, in 1884, Tuke completed his first painting of boys in boats. Called Summertime, it depicts two local boys, John Wesley Kitching and John Cotton, in a punt called Little Argo. Tuke's style was more impressionistic than that of the other Newlyn painters and he only stayed a short time. However, he remained close friends with many of the artists until his death.[7]

Our Jack, portrait of Jack Rolling circa 1886

Tuke painted oil studies of young male nudes during a tour of Italy in his early twenties in 1881, but the theme did not become central to his work until after 1885, when he had moved to Falmouth, then still a secluded part of Cornwall and a part of the country with a very mild climate that was more agreeable for nude bathing. There Tuke focused on maritime scenes and portraits, which showed boys and young men bathing, fishing and sunbathing on sunny beaches.

He settled at Swanpool and bought a fishing boat for £40, 'Julie of Nantes', and converted it into a floating studio and living quarters.[8] He rented two rooms in Pennance Cottage, situated between Pennance Point and Swanpool Beach.

The cottage remained Tuke's permanent base until his death, although he often lived aboard boats.[9] Here he could indulge his passion for painting boys. His early models were brought down from London but he soon befriended some of the local fishermen and swimmers in Falmouth who became his close friends and models. These included Edward John "Johnny" Jackett (1878–1935), Charlie Mitchell (1885–1957), who looked after Tuke's boats, Willie Sainsbury, Tuke's eldest nephew, Leo Marshall, Georgie and Richard Fouracre (sons of his housekeeper),[10] George Williams – younger son of close neighbours, Maurice Clift – nephew of a family friend, Ainsley Marks, Jack Rolling[11] (in some sources mispelt "Rowling")[12][13] Freddy Hall, Bert White and Harry Cleave.[14]

Due to Tuke's habit of interchanging heads and bodies of his models in his paintings, it is often not possible to identify each figure exactly.[15] All of Tuke's regular models were eventually called up during the First World War, and some did not return, including Maurice Clift (a model for August Blue) who was killed in France.[16]

Tuke established an art gallery in Falmouth with William Ayerst Ingram as a commercial outlet mainly for their own paintings.[8]

He would often commute to London as Falmouth was well served with a railway service and he was not therefore isolated from the London art scene. He produced numerous portraits of society figures, local officials and members of the Tuke family circle. He also painted many more saleable landscapes and was well regarded as a painter of ships in sail. Henry Scott Tuke was elected Associate of the Royal Academy in 1900 and Royal Academician in 1914.[17] 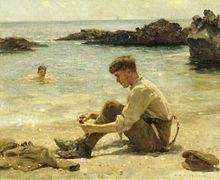 Tuke favoured rough, visible brush strokes, at a time when a smooth, polished finish was favoured by fashionable painters and critics. He had a strong sense of colour and excelled in the depiction of natural light, particularly the soft, fragile sunlight of the English summer. Although Tuke often finished paintings in the studio, photographic evidence shows that he worked mainly in the open air, which accounts for their freshness of colour and the realistic effects of sunlight reflected by the sea and on the naked flesh of his models.[18]

In his early paintings, Tuke placed his male nudes in mythological contexts, but the critics found these works to be rather formal, lifeless and flaccid.[19] From the 1890s, Tuke abandoned mythological themes and began to paint local boys fishing, sailing, swimming and diving, and also began to paint in a more naturalistic style. His handling of paint became freer, and he began using bold, fresh colour. One of his best-known paintings from this period is August Blue (1893–94; Tate, London), a study of four mostly nude youths bathing from a boat. The Looe artist, Lindsay Symington (1872–1942), modelled for the blonde boy holding onto the boat in the water; though not a regular model, Symington was a good friend of Tuke, the latter often visiting the Symington family home, Pixies' Holt, at Dartmeet. Tuke painted some female nudes but these were not as successful as his male nude paintings.

Tuke's paintings of nude youths are never explicitly sexual. The models' genitals are almost never shown, they are almost never in physical contact with each other, and there is never any suggestion of overt sexuality. Most of the paintings have the nude models standing or crouching on the beach facing out to sea, so only the back view is displayed.[20] 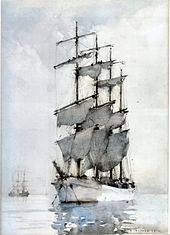 Tuke is also regarded as an important maritime artist. Over the years, he painted many pictures of the majestic sailing ships, mainly in watercolour, that were common until the 1930s. Tuke was often fascinated with the beauty of a fully rigged ship, and since his childhood could draw them from memory. His decision to move to Falmouth in 1885 was, in part, influenced by the constant presence of the ships there.[21]

Tuke enjoyed a considerable reputation, and he earned enough money from his paintings to enable him to travel abroad and he painted in France, Italy and the West Indies. In 1900 a banquet was held in his honour at the Royal Cornwall Polytechnic Society. He was elected to the Royal Academy of Arts in 1914.

Major examples of his male nudes were purchased by major art galleries including The Bathers at Leeds Art Gallery in 1890 and August Blue at the Tate, London in 1894. But he was also well known as a portraitist, and maintained a London studio to work on his commissions. Among his best known portraits is that of soldier and writer T. E. Lawrence ("Lawrence of Arabia").

In later life Tuke was in poor health for many years, and died in Falmouth in 1929 and was buried in a Falmouth cemetery close to his home.[23] He kept a detailed diary all his life but only two volumes survived after his death and have since been published. He also kept a detailed artist's Register which survives and has been published by the Royal Cornwall Polytechnic Society in Falmouth.

After his death, Tuke's reputation faded, and he was largely forgotten until the 1970s, when he was rediscovered by the first generation of openly gay artists and art collectors. He has since become something of a cult figure in gay cultural circles, with lavish editions of his paintings published and his works fetching high prices at auctions.[24][25]

Elton John is a keen collector of Tuke's works and in 2008 loaned eleven of his own pieces, including works in oil, pastel and watercolour, for an exhibition in Falmouth.[26]

The student halls of residence at University College Falmouth are named after Tuke, a tribute to him as both an artist, and a famous resident of the town. At the time they were built and named, the school was known as the Falmouth College of Arts. Also in Falmouth is a collection of 279 of Tuke's works belonging to the Royal Cornwall Polytechnic Society, the largest such collection in public ownership. The bulk were donated by a single collector in the 1960s, but the Society maintains a policy of adding to the collection.[27]

During the 150th year after H.S. Tuke's birth, there were three exhibitions of his work: